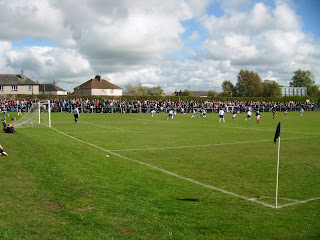 I went to Dalry today for the second leg of the semi-final of the Scottish Junior Cup. Dalry is a village in North Ayrshire and 23 minutes by train away from Paisley. Just like the other semi-final played today (Bo'ness United v Auchinleck Talbot, I was at the first leg last Saturday) this was an East against West confrontation. The other semi-finalists have eleven Scottish Cups between them whereas Dalry have never reached the final and Musselburgh have won the coveted trophy only once, in 1923 (as Musselburgh Bruntonians).

After a 23-minute train journey I got off at Dalry. Normally it is a 10-minute walk to the ground but a badly timed orange walk caused some disruption to the traffic in the village. Kick-off was delayed by fifteen minutes to allow all supporters to be inside the ground before kick-off. Although temperatures were around 27 degrees in London today according to the BBC website it was only about 12-13 degrees in the west of Scotland and it had been raining all morning as well. Luckily the rain had stopped at around 2pm and at around 3pm the sun even came out providing a suitable backdrop for this semi-final.

Musselburgh went into this second leg as the favourites. They had won the first leg 1-0 and ply their trade in the East Region's top division. Thistle were relegated from the West Region Super League First Division last season and now play in the Ayrshire District League, which is the third tier of the West Region. When Scott Gibson scored for the Burgh after 25 minutes things started to look really bleak for Thistle but being 2-0 down on aggregate at half-time meant a comeback was still possible.

In the second half Dalry looked much stronger but somehow they were unable to score. Even when they were awarded a penalty, Craig Menzies hit the post, despite sending the keeper the wrong way. With fifteen minutes to go Dalry were awarded a free-kick, about 20 yards out, and James Canning curled it past the wall beautifully: 1-1 (see this YouTube link). This was also the final score as both sides squandered a few more good chances. No first Junior Cup final appearance for Thistle on 29th May but what a great run it has been for them. 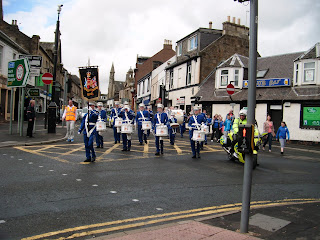 An orange walk took place when the supporters were making their way to Merksworth Park causing disruption to traffic and delaying kick-off by fifteen minutes. 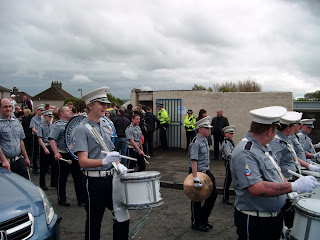 The home supporters' entrance to the ground with the orange walk going past. 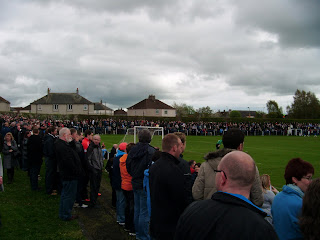 A healthy crowd had turned up today, I estimate about 2,000. 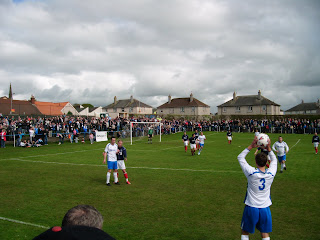 Musselburgh seemed the more composed side in the first half... 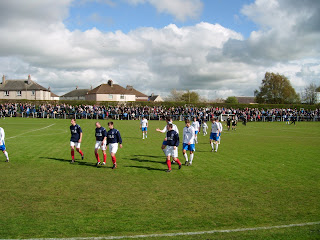 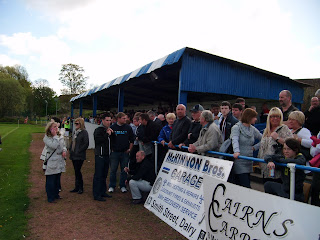 The enclosure at half-time. 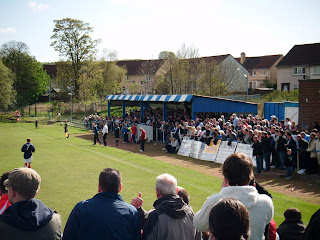 Again the packed enclosure in the second half. 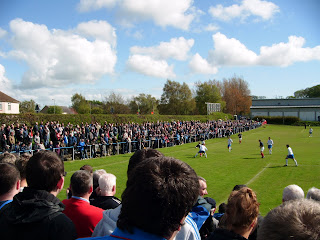 Musselburgh supporters, on the left, had turned up in numbers. 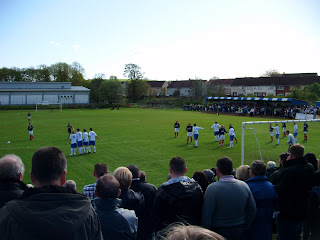 Dalry's James Canning steps up to take a free-kick fifteen minutes before time... 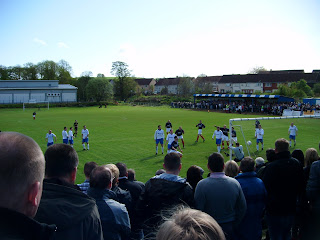 ...and curls it in beautifully.