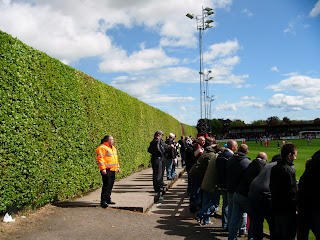 I am running slightly behind with my blog as I I have been quite busy at work lately and I have spent two of the last three weeks in Kraków, Poland for my work as well with not much opportunity to add any updates. However I have added all recent pictures to the My Football Travels Facebook page including pictures of the Wisla Kraków v Polononia Warszawa game.

Before I went to Poland I added another Scottish Football League ground to my list: Glebe Park, home of Brechin City. The occasion was the home team v Ayr United, the second leg of First Division play-off final. The first leg had ended in a 1-1 draw. From what I had heard the Honest Men were the stronger side in that first game but were unable to finish Brechin off. The men from Angus even managed to score the equaliser in the final five minutes of the match. As both teams were quite evenly matched throughout the season it seemed both sides had all to play for.

I had not been to Glebe Park before. The main reason for this is that I usually travel to matches by public transport and Brechin is a relatively difficult place to get to if you stay in Paisley. The easiest way is to take a train to Montrose and jump on a bus from there as Brechin does not have a railway station. This also requires a bit of planning in advance as train tickets from Glasgow to Montrose bought on the day of travel are usually quite expensive. Luckily, Tony, a friend of mine who is an Ayr United supporter, had arranged for me to travel along with him in his brother-in-law's Fiesta together with two more Ayr fans. The four of them picked me up in Glasgow city centre at around 11:45. We arrived in the village of Brechin at around 2pm. Brechin is definitely a village, with a population of about 7,000. Although it is sometimes referred to as a city, for example in the name of the football club, this is simply for historical reasons, mainly the fact that there is a cathedral.

After we had parked the car on the car park of the Cooperative supermarket, which is near the ground, we made our way to Hudson's Bar next to the Northern Hotel, which had been taken over by Ayr fans. The atmosphere was excellent, with a DJ in the car park at the rear of the pub. At about 2:45pm we walked to Glebe Park. Ayr fans were allocated the fairly modern Trinity Road Stand, which holds about 1,000 and was filled to capacity today, and about half of the Hedge Side. The famous hedge is the most typical part of Brechin's stadium but with its mixture of well maintained terraces and stands it is a very attractive ground all round. I tried to buy a programme but did not see any programme sellers inside the ground. After paying my £14 at the gate I did not see any inside the ground either. When I asked a steward about it he figured they had probably sold out by now. I know I may sound like a total anorak, and I probably am, but this really annoyed me as I have programmes of all the other 37 Scottish grounds I had visited previously. I decided I would not let it spoil my day and would try to get one on eBay the next week.

The Ayr fans were loud and boisterous today and seemingly convinced that there was only going to be one outcome today: a win for the Honest Men and promotion to the First Division. However things did not seem to go very well for the team from the west coast in the first half. Not long before half-time I decided to go for a pie. There was a massive queue at the pie hut and staff that were obviously not used to four-figure crowds. It was a long wait and I even missed the first goal: United's Jonathan Tiffoney meant to pass back to goalkeeper Alan Martin but apparently no one had told him about the notoriously strong winds in this part of country and the ball rolled into his own net. Then, to make matters worse the pies had sold out by the time it was my turn to order. The guy in front of me had bought the last one. Since I had waited for so long I did not want to leave empty-handed and went for a cheeseburger instead and so did Tony. I have to say it was one of the poorest attempts at a cheeseburger I have ever sampled.

We made our way back to the top of the Trinity Road Stand and saw a stronger and more determined Ayr United in the second half. Nevertheless they struggled to find the net. With thirteen minutes left on the clock Mark Roberts equalised, which led to joyous scenes in the Trinity Stand. However this was nothing compared to the celebrations after Michael Moffat put the men from Ayr 2-1 ahead two minutes before time. Moffat's goal even sparked a mini pitch invasion. After the referee had blown the final whistle the Ayr fans invaded the pitch en masse, and of course I decided to join them. Tony even lifted match winner Moffat on his shoulders. When I returned to the stand I could not believe my luck when I found an immaculate match programme under one of the seats. Coupled with the £20 note I had found in the stand as well I had no more reason left to complain about the trip to Angus. At around 6pm we left Brechin and we were back in Glasgow at around 8pm. 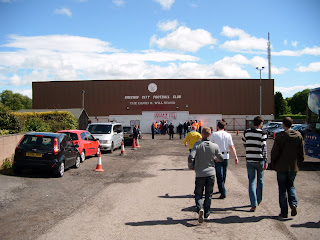 Approaching Glebe Park: the Trinity Road Stand in front of us. 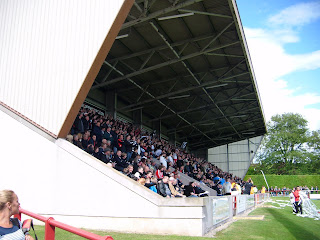 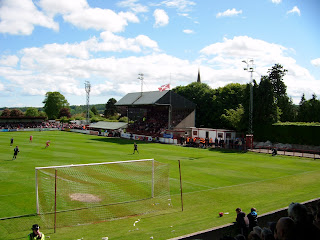 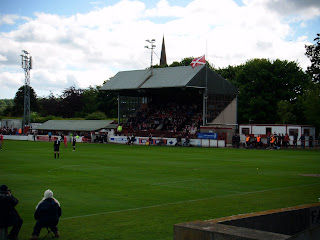 Another look at the Main Stand. Small but perfectly formed. 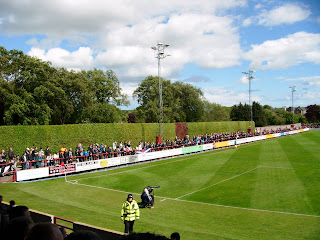 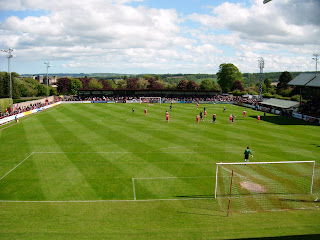 Looking toward the Cemetery End. 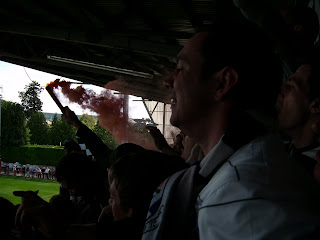 Some naughty boy with a flare... 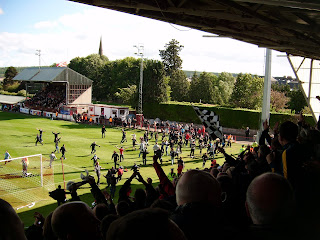 A mini pitch invasion after Moffat's goal minutes before the final whistle... 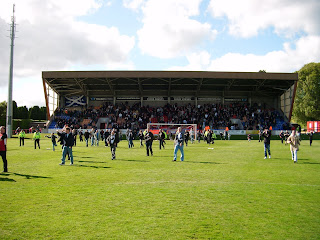 ...and a proper one at full-time! Looking towards the Trinity Road Stand. 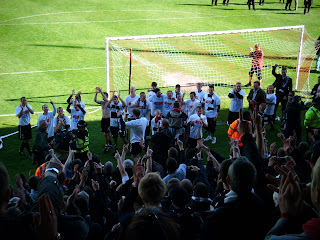