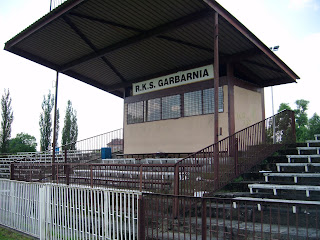 The fixture I had originally pencilled in for Sunday 29th May was the Scottish Junior Cup Final at Rugby Park. However on Thursday 26th May it was confirmed that I would be travelling to Kraków in Poland for a week for my work. This trip had been in the pipeline for a few weeks and I had enough time to do some research on football grounds I could visit as well. I flew from Edinburgh to Kraków at 6:30am and arrived at my hotel, the Hilton Garden Inn just south of the city centre, just before 11am local time. Luckily they already had a room ready so I could check in right away. After unpacking my bag I changed into a t shirt and three-quarter length shorts as temperatures were a lot higher than in Scotland and I was ready to explore the city.

The first stop was Stadion Garbarni, only a very short walk from my hotel, probably about ten minutes. The ground lies within the city boundaries however the location of the park had a rural feel to it. The gate was open so I was able to get inside the stadium.

Garbarnia were founded in 1921 by a group of workers from the then nearby tannery. This is not really a surprise when you know that 'garbarnia' is the Polish word for 'tannery'. In the beginning the club did not have its own stadium and led a rather nomadic existence. However in 1926 they moved into the Stadion Garbarni przy ul. Barskiej. This stadium was demolished in 1973 to make way for the Forum Hotel, a hotel that was meant to be amongst the most luxurious in then-communist Poland. This monstrosity currently lies dormant and I looked right at it from my hotel room at the Hilton Garden Inn.

Garbarnia's current ground was opened in 1990. This surprised me as it looks much older than that. The club currently play in League III, the fourth tier in Polish football. They have seen much better days however, albeit quite some time ago. In 1929 Garbarnia reached second place in the top league, only eight years after they were founded. In 1931 they did one better and were crowned Polish champions. After World War II the club lost its status as one of the top sides in Poland and they have only had a few short spells in the top league in the last sixty years or so. 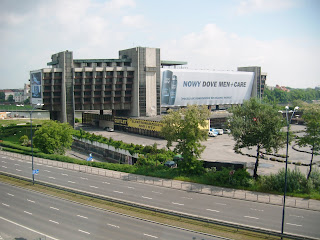 The Forum Hotel was built on the site of the former Garbarnia stadium. The hotel has been closed for years now but it is currently the biggest billboard in Poland thanks to the TK Maxx advertising on the other side of the building. This picture was taken from my hotel room. 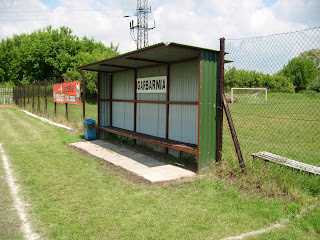 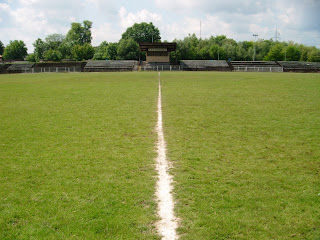 Looking toward the main stand. 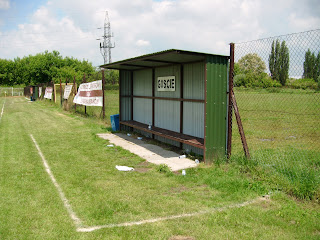 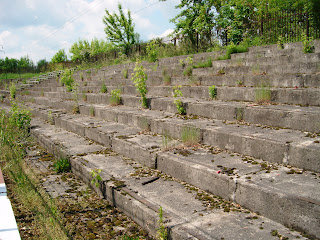 Old-fashioned terracing in the northern end of the ground... 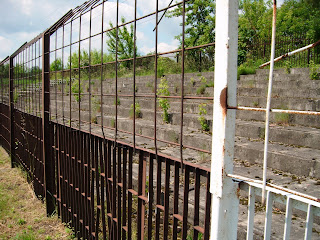 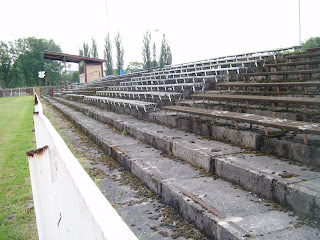 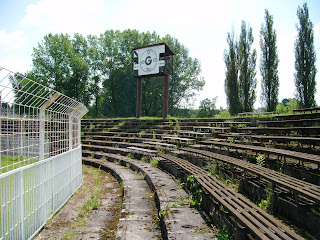 A great-looking clock and scoreboard. Hard to believe this stadium is only twenty years old. 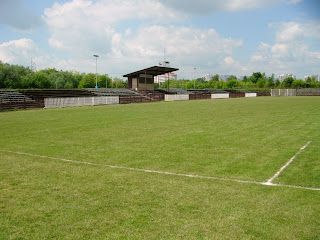 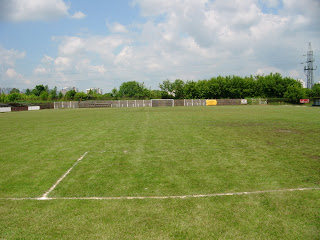 The terrace in the north end. 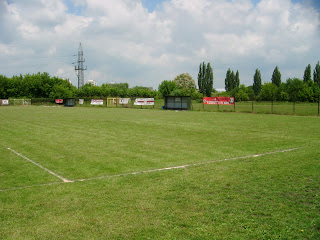 And looking toward the east.
Posted by Bas at 22:05