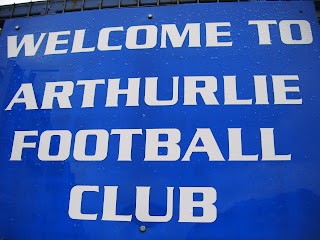 On Saturday 11th June I saw my last game of the 2010/11 season at Dunterlie Park, home of Arthurlie. The men from Barrhead were playing 2010/11 West Region league champions Irvine Meadow in the semi-final of the Evening Times Cup Winners Cup, the traditional end-of-season competition in the West Region.

The journey from Paisley to Barrhead is a very short one. I took a bus from Paisley but Dunterlie Park is situated very close to Barrhead railway station which has a direct link to Glasgow Central. Since there were no other football games scheduled for today there was a large crowd at the match, in fact so large that all food at the pie stand was sold out only twenty minutes after kick-off. Today's attendance figure was probably also boosted by the reasonably good weather at the start of the afternoon however the rain started soon after kick-off.

Arthurlie opened the score five minutes before the interval. John McLay's goal was against the run of play but the goal visibly increased the 'Lie's confidence and they had a few more chances before the end of the first half. However, Medda equalised after 68 minutes with a Michael Hughes header. Hughes then scored another header 15 minutes later and it looked like the Ayrshire team were through to the final. Arthurlie were not giving up however and Stephen Keown scored the equaliser three minutes into injury time.

Penalties were going to decide who would play Shotts Bon Accord in the final. The 'Lie showed composure and won the series 4-2 which led to a second pitch invasion within a minute. Arthurlie's goalie Neil Parry was surrounded rather prematurely immediately after his second save but Gary Arbuckle's decisive penalty ensured the celebrations could start for real.

Five days later Arthurlie would win the Evening Times Cup by beating Shotts Bon Accord 1-0 at Newlandsfield Park. This was a match I was not able to attend because I had to travel to Poland once more for my work. 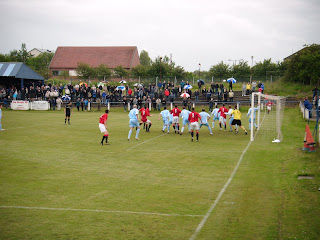 A Medda corner in the first half. 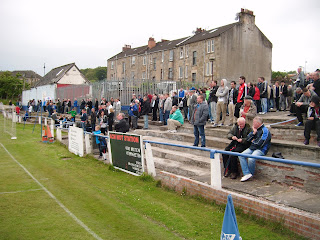 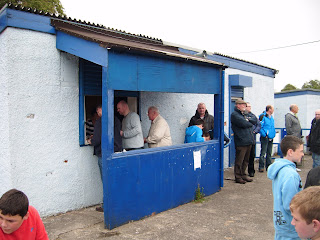 I queued up for a pie but everything was sold out before I got to the end of the queue. 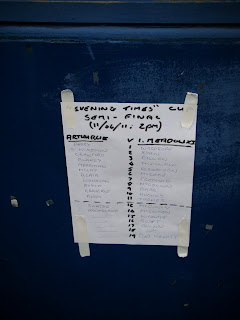 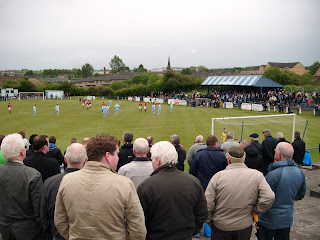 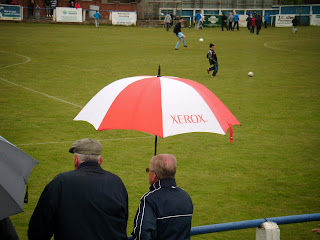 Today's weather was typical for June 2011. 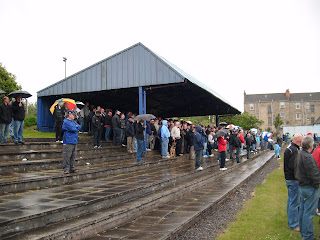 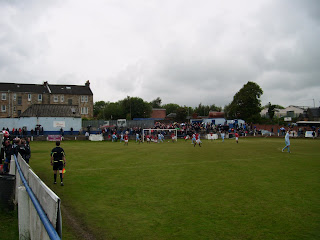 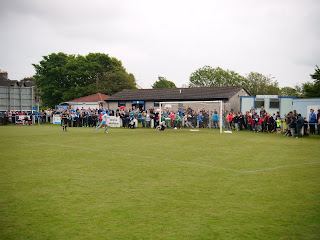 The Barrhead side won the penalty shoot-out 4-2... 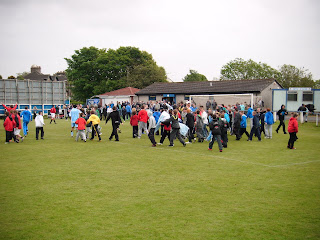 ...prompting the local youth to invade the pitch. 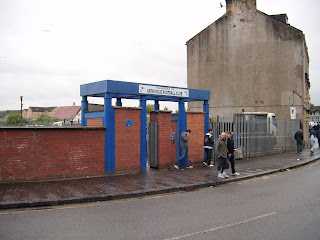 The gates to Dunterlie Park after the game.