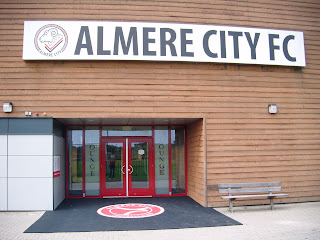 Last week I spent five days in the Netherlands for my work. I stayed in the Bastion Hotel in Amsterdam/Amstel which is a 30-minute walk from the Amsterdam ArenA. However Ajax were not playing any home matches last week but of course I had to see at least one game, preferably in a stadium I had not visited yet. It turned out Jupiler League side Almere City were playing a pre-season friendly at home against Topklasse side FC Lisse. At first there was some confusion as the Almere City website listed the fixture as FC Lisse-Almere City but later the club confirmed to me on Twitter that the game was to be played at the Mitsubishi Forklift Stadion, the home of Almere City.
I left my hotel at about 5:45pm and had to walk through a rain shower of biblical proportions. Despite carrying an umbrella I arrived soaking wet at Duivendrecht train station about twenty minutes later. I then had to buy my train ticket to Almere (€9.80 return). This is not as straightforward as it sounds since in the Netherlands even larger stations like Duivendrecht do not have a ticket office meaning all tickets have to be bought from a ticket machine. This would normally not be a problem for me however most of these machine only accept Dutch bankcards (and I do not have a Dutch bank account) and no cash or foreign debit or credit cards. Luckily there was one machine that also accepted cash but to make things more complicated you cannot pay with banknotes, only coins are accepted. As I already knew this I had made sure I carried enough €2 coins to last me through my five-day stay.

I jumped on the 6:10pm train to Almere and got off at Almere Parkwijk at 6:38pm. The Almere City website said kick-off was at 7pm which meant I was probably going to miss the start but I was not too concerned about that. I was happy too see that there was no sign of the torrential rain I had endured in Amsterdam only thirty minutes earlier and I made my way to the stadium. Despite its population of almost 200,000 Almere is a very new town: the first house was completed in 1976 and it only became a municipality in 1984. The town is situated in the province of Flevoland, which completely consists of reclaimed land. The new province was not introduced to professional football until 2005 when FC Omniworld were admitted to the Jupiler League. They were renamed Almere City in 2010 and are as far as I know the only football club in the Netherlands with 'City' in their name.

It has not been plain sailing for the Flevolanders since they were admitted to the second tier of the Dutch league pyramid. Their highest position in the Jupiler League was 13th place in 2008. In 2009 they ended bottom of the league in 20th position. As there was no relegation at that time the club stayed in the Jupiler League. The season after they fared slightly better and finished in 14th place. Last season they were bottom of the league once more. By now there were only 18 teams in the Jupiler League after the relegation of FC Oss to the newly-formed Topklasse and the demise of HFC Haarlem in 2010. It looked like Almere City were going to be the second team to be relegated from the Jupiler League but when RBC Roosendaal folded at the end of the season it became clear that Almere would have a professional football club for at least one more season.

I arrived at the ground just after 7pm and was pleasantly suprised when I found out I did not have to pay to get inside. Unfortunately however I had to wait for another thirty minutes to see some football as kick-off was at 7:30pm and not the advertised 7pm. About 150 people had found their way to the stadium, which holds about 3,000. City have struggled to attract a significant support to regular league games as well. Crowds of just over 1,000 are common and the situation is similar to that of the Scottish Football League teams in the 'new towns' of Cumbernauld and Livingston. Many people living in these towns were born elsewhere and have taken their football team allegiances with them as well. Whereas people in Cumbernauld support Celtic or Rangers rather than Clyde, Ajax are a far more popular club in Almere than City.

When the action on the pitch finally got underway it seemed Almere City were a lot stronger than the men from Lisse even though the two teams would normally have played in the same league in the 2011/12 season. Somehow Almere were not able to find the net until Paul de Lange scored from the spot after Mikhail Rosheuvel had been brought down. Almost immediately after the opening goal the referee blew his whistle: half time.

I then did something I normally do not do: I left the stadium before the second half started. I had not found the football too exciting and I thought about the relatively long journey back to the hotel ahead of me (combined with an early start at work the next morning). The fact I had not paid to get into the stadium made the decision to leave a little bit easier. When I arrived back in my hotel room just after 10pm I found out that Almere City had won the match 4-0. 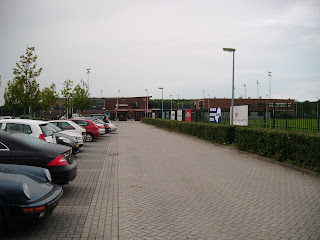 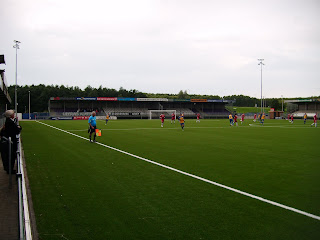 There is a small stand behind one of the goals. This stand housed the Ultras Almere (look closely...). 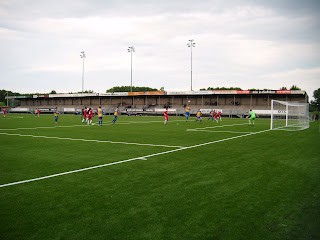 A larger stand along the east side of the stadium. 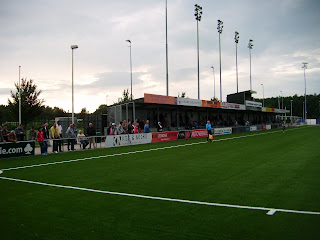 A covered terrace along the west side. 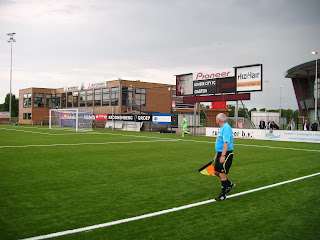 No stand behind the other goal. 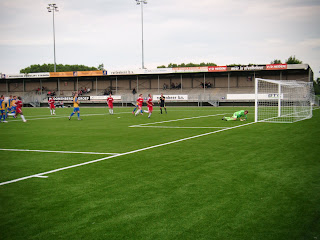 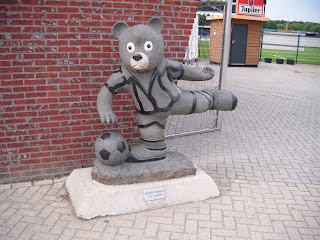 The plaque says: 'professional football: it's possible in Almere.' 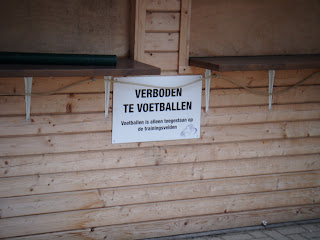 'Playing football is not allowed.' A sign you do not expect to find inside a football stadium.