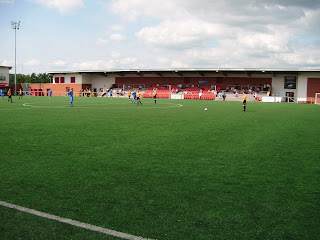 On Saturday I was doing some holiday shopping with my wife in Glasgow but I managed to see my first competitive match of the season in between. The Sectional League Cup is the competition that traditionally opens the season for the Scottish Junior sides in the West Region. I went to Petershill Park in Springburn to see Rossvale's second competitive game in the Juniors set-up against Kilsyth Rangers. Their first match was a respectable 2-2 at home against Cumbernauld last Wednesday, also for the League Cup.

I took the 1:32pm train from Queen Street to Barnhill (a 10-minute journey). Rossvale have arranged a groundshare deal with Superleague Premier Division club Petershill. From Barnhill train station it was a very short walk, about five minutes, to Petershill Park. Rossvale, who hail from Bishopbriggs in East Dunbartonshire, will make their debut in the Central Division Two this season as the 64th West Region Junior club.

Petershill Park, which opened in 2007, has a capacity of about 2000, with an all-seater stand holding 562 spectators. The pitch is of the artificial variety and there are floodlights, two features that are highly unusual for Junior grounds. Unlike most other grounds in the Juniors Petershill Park is very sterile and therefore lacks a bit of atmosphere. A big plus is the bar under the stand and therefore I give Petershill Park a pass mark nevertheless.

Kilsyth Rangers had a dream start on Saturday when they were handed a penalty after only two minutes after one of the Rossvale defenders clumsily handled the ball. Joe Barclay did not fail from the spot and put Rangers ahead: 1-0. Barclay scored a second goal after fifteen minutes played. The newcomers were struggling in the first half and they must have been relieved they were only two down when the referee blew the half-time whistle.

Although I was at Petershill Park as a neutral I did not want Rossvale to get a doing but that was exactly what happened in the second half. Kyle Dempsey scored 3-0 only five minutes after the interval. Francis Kelly then added a fourth to the Rangers tally with a 25-yard shot. The fifth Rangers goal was scored by Kenny McLillan. Alan Sime managed to pull one back for Rossvale but as the cliche goes, it was too little too late. Ryan Nimmo scored the late sixth Rangers goal.

After this rather one-sided affair I walked back to Barnhill station where I had to wait 20 minutes for my train back. Instead of going all the way back to Queen Street I got off at Duke Street station in Dennistoun, about 100 yards from the flat in Roslea Drive I used to live in about ten years ago and I was happy to see how much the area had improved in the past decade. After a twenty-minute walk I was back in Glasgow City Centre. 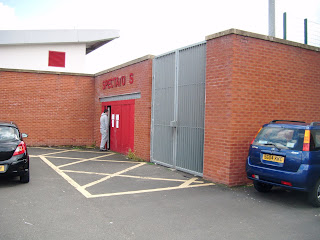 Entering through the turnstiles. 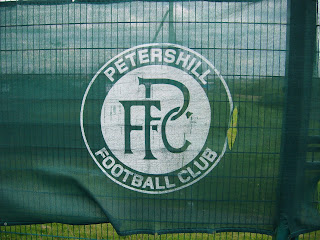 Petershill FC were playing away at nearby St. Roch's today. 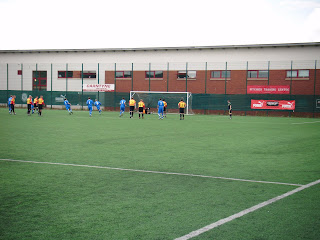 Joe Barclay scores from the spot to put Rangers 1-0 ahead after only two minutes. 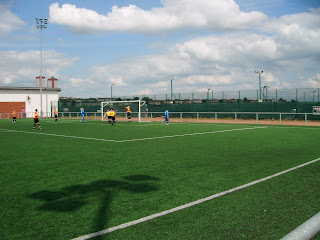 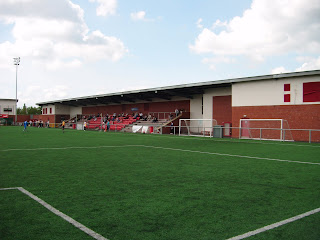 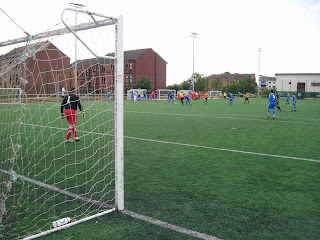 Dug-outs and a small terrace on the other side. 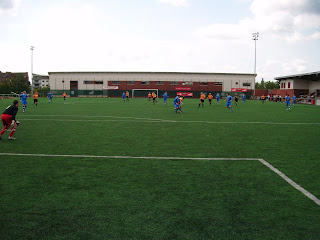 No stands or terraces behind either of the goals.