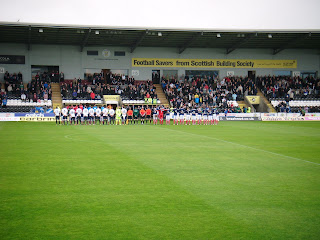 Last Wednesday I went straight from work to St Mirren Park to see Billy Stark's Scotland Under-21 team take on their Norwegian counterparts. The 4pm kick-off time was slightly inconvenient but it also made it possible to see both the youngsters and the full Scotland team in action in one day. Craig Levein's men were playing Denmark in a friendly, or 'international challenge match' as they are called these days but I had already decided that one game was enough on a school night. The horrendous weather helped me not to change my mind!

I was pleased to hear that all home qualifiers for the Under-21 European Championship will be played at St Mirren Park, which means regular international football at my doorstep including the crunch match against my home country on 29th February 2012 (I do not think I have seen many games on 29th February by the way). I can recommend the U21 games, you will see some good football and they are great value and it was a shame only 1,654 fans turned up. Tickets for the game on Wednesday were only a fiver but I was lucky to get a free ticket from a Scotland fan outside the ground who did not want any money for it.

It was a great Scottish performance but it was marred to an extent by Steven Saunders' Achilles injury early in the first half. Hull City's Tom Cairney scored the opening goal in the first half. Aberdeen's Ryan Jack made it 2-0 after 30 minutes into the second half and three minutes later Dundee United's Stuart Armstrong scored the third. A convincing win for Scotland and hopefully they will be able to build on this for the upcoming qualifiers.