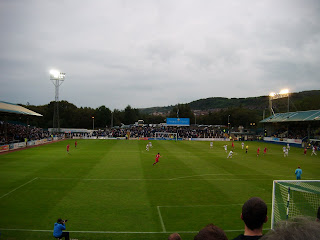 On Tuesday 23rd August I made my way to Greenock for the clash between arch rivals Greenock Morton and St Mirren. The Scottish League Cup second-round encounter was the first competitive Renfrewshire derby since they were paired in the semi-final draw of the League Challenge Cup in 2005. I was at that match as well, a tense affair at Love Street, which turned out to be the final Renfrewshire derby played at the old Saints ground. Both teams were unable to find the net during 120 minutes of football six years ago but the Buddies were victorious on penalties.

A healthy but strong (and sometimes not-so-healthy) rivalry has remained despite the teams not meeting each other regularly on a competitive basis. During the noughties the 'Ton dropped down the SLF divisions. The Greenock side sank as low as the Third Division in 2002 but recovered fairly quickly. By the time they returned to the First Division in 2007 the Saints had won promotion to the Scottish Premier League. Nowadays the sides usually meet in the Renfrewshire Cup final, a glorified pre-season 'friendly'. Despite its humble status the Renfrewshire Cup has quite a bit of history illustrated by the fact Morton has won it 51 times compared to their Paisley rivals' 53.

Exactly one month ago today I took the 6:20pm train at Paisley Gilmour Street train station and got off at Cartsdyke station at 6:45pm. Since I travel to my work in Greenock every day by train I did not have to buy a train ticket, a nice little bonus. The walk from the station to Cappielow Park is a short one, about 5-10 minutes. The St Mirren fans were allocated the Wee Dublin End, an uncovered terrace that has been turned into an all-seater stand by adding bench seating. With its variety of stands and terraces Cappielow is a great Scottish football stadium, similar in character to Ayr United's Somerset Park and Queen of the South's Palmerston Park. Of course, when in the presence of Morton fans I will maintain that St Mirren Park is a slick and modern SPL stadium and Cappielow is a tip...who am I kidding.

Much like the venue, the match itself was a cracker, a lively encounter between two in-form sides: after eight minutes, Gary Teal put the visitors ahead with a free-kick, my camera said 'memory full' as the ball went in, typical. Truth be told, Morton had been the stronger team so far and, credit where its due, they were not fazed by this early set-back and twenty minutes later the First Division side were 2-1 up, thanks to goals by Michael Tidser and Peter MacDonald. 2-1 was also the half-time score and Saints only had themselves to blame.

The Buddies looked more convincing at the start of the second half. Steven Thompson levelled the score 1o minutes after the interval and five minutes later, Nigel Hasselbaink's spot-kick made it 3-2 to the visitors. Steven Thompson's second came six minutes later but somehow Saints seemed adamant to do this the hard way and complacency (Lee Mair...) struck again: with eleven minutes to go Andy Jackson netted the home side's third goal. Somehow and with five men in defence, St Mirren managed to hang on to their slim lead.

In the third round St Mirren defeated St Johnstone 2-0 at McDiarmid Park. Saint will meet Ayr United at St Mirren Park next month with a League Cup semi-final berth at stake.

For pictures of a capacity crowd at Cappielow (against Celtic) see this post. For last year's Renfrewshire Cup final at Morton's ground see this post. 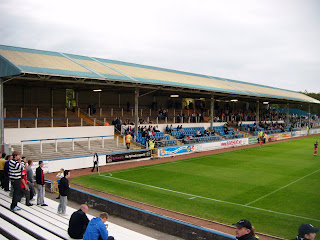 Terraces in the back, seats in the front: the magnificent Cowshed before the game. 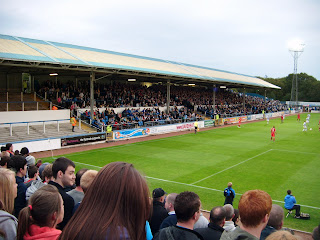 The Cowshed during the game. 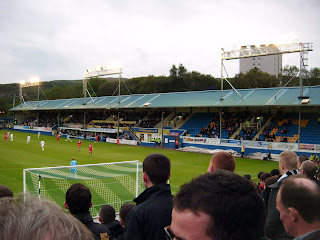 The Main Stand, Saints fans were allocated part of it but the majority preferred the Wee Dublin End. 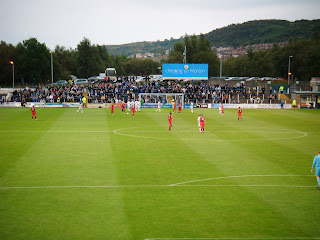 The Sinclair Street End: Gary Teale is about to take the free-kick that put the Buddies ahead: 0-1. 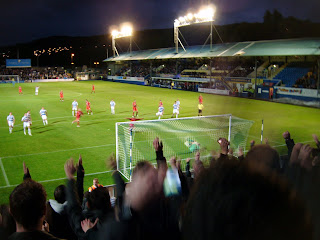 Saints are ahead once more after Nigel Hasselbaink's penalty: 2-3.