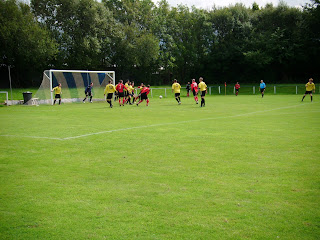 Regular readers of my blog may have wondered what was going on as I had not updated the site for four weeks. I have been quite busy with work and there was the small matter of a fortnight-holiday on Majorca from which I returned today. I will post reports and pictures of the matches I have seen during the last few weeks in the next few days.

Four weeks ago tomorrow I decided to see Bellshill Athletic's first home game of the season against Greenock Juniors. I had seen Bellshill getting humped 7-3 by St. Roch's on the previous Saturday in a cracking game and I was wondering how they would bounce back from that. Athletic have experienced two successive relegations in the last couple of seasons and if the result at Provanmill Park was anything to go by it may be another difficult season for the team originally from North Lanarkshire. I say 'originally' since they will be playing their home games at Fullarton Park in Tollcross, the home of Vale of Clyde, from this season. The good thing for me is that it makes it easy to see another football match when I am shopping in Glasgow with my wife...

This was my second visit to Fullarton Park. I was at Vale of Clyde v Clydebank last season and somehow managed to arrive 17 minutes after kick-off. This time it was even worse: I had made a last-minute decision to visit this match and was a bit unlucky with the bus from Paisley to Glasgow city centre. I never had to wait for the number 62 from the Argyle Street to Tollcross but by the time I arrived at the ground the game had been 40 minutes old and I had missed two goals. I still had to pay the full price to get in however (£4) but was pleasantly surprised to find out a programme was issued for this game (£1). As you can tell from the pictures, the attendance was poor, I think there were about 60 fans inside the ground. When the referee blew the half-time whistle (score 1-1) I walked to the bar and bought a bottle of Miller, it was a relatively sunny day in Scotland and was going to make the most of it.

Bellshill were struggling again today but it was not as bad as the performance at Provanmill Park a week earlier. Greenock's John Carter scored his second of the day (apparently...) 18 minutes into the second half and the Inverclyde team were deserved winners, at least judging from the second half. 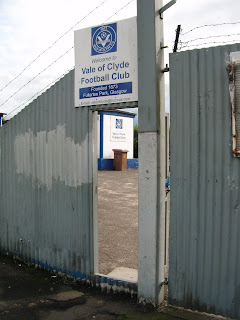 For the 2011/12 season Bellshill have struck a ground share agreement with Vale of Clyde. 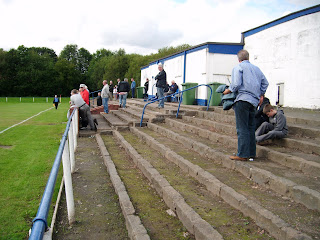 Not many fans from either team on the crumbling terrace. Fullarton Park is not the most impressive junior ground but it is one I really like for some reason. The beers (cold and cheap) definitely help! 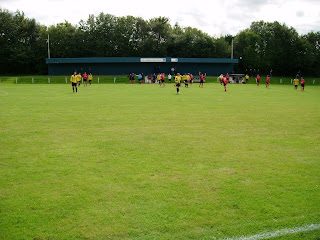 Not many people in the enclosure either. 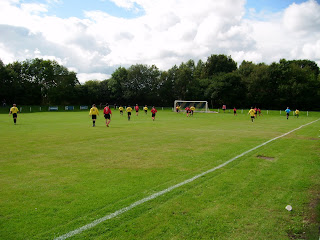 Bellshill were not as poor as in the previous week. 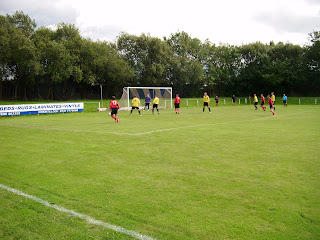 Bellshill under pressure in the second half. 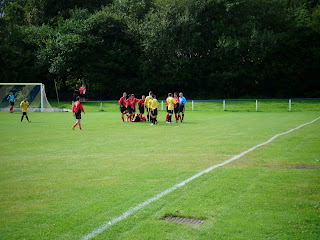 Moments before the final whistle: Greenock are hanging in there, some tempers are flaring.