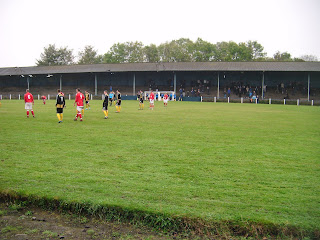 I had not planned to see a match this weekend but when my wife told me she wanted to see some shops in Glasgow on Saturday it gave me the opportunity to visit one of the local junior sides. I had not been to Tinto Park in Govan yet but it was high on my to-do list, mainly because of its close proximity to my hometown of Paisley. Benburb play in the Central Division One, the third tier of junior football in the West Region. These days the Bens are a club with fairly modest ambitions with their heyday long behind them. The boys from Govan won the Junior Cup twice, in 1934 and 1936, and the West of Scotland cup four times, the last time as recent as ten years ago.

After I got off my bus at Bellahouston Park I walked to the ground, a five-minute stroll from Paisley Road West. Tinto Park is situated only a few hundred yards away from Ibrox Stadium, home of a slightly more illustrious team in the Govan area of Glasgow. After I had paid my four quid to get in and had bought a programme I immediately noticed the large terrace which runs along the complete western side of the ground. I have read suggestions that it is the largest terrace still in existence in Scotland and it may very well be although with the state of disrepair it is in you cannot expect it to hold more than a few hundred spectators.

It was a miserable day on Saturday but apparently it was even worse last weekend when I enjoyed temperatures of 28/29 degrees in London. The Junior Cup first round tie between Benburb and fellow Central Division One side Cambuslang Rangers was originally penned in for Saturday 1st October but it was postponed due to a water-logged pitch. Yes it is that time of the year again, i.e. October to April.

It is a shame that, on an 'international weekend' when the Old Firm were not playing, not more fans of Glasgow's 'Big Two' make it to these kind of games. Both Celtic and Rangers fans have been protesting, with some justification, against the over-regulation of the way supporters are supposed to behave but Junior football really is the promised land for people who want to experience football as it was viewed decades ago. Crumbling terraces, great banter between supporters of both clubs and you can even take your 'kerry oot' inside with you (do not worry about the 'no alcohol' signs outside some Junior grounds, no-one else does!). There were only about 100 in attendance on Saturday, most of them Cambuslang fans. Bonus points go to the father and son wearing St Mirren jackets. Let the records state that I did not see anyone drink alcohol on the terraces of Tinto Park however, they were a well-behaved bunch (apart from the Cambuslang supporter behind the away dug-out who kept throwing profanities towards the poor referee).

If you have been to a few junior games you will notice there are a few things exactly the same at every single junior match. One of these staples is The Dog. I have not been to any junior game, that was not also witnessed by a canine, usually a very bored-looking one. On Saturday I spotted an Alsation, I am not sure if it was the same one as at Dunterlie Park. Then there is the aforementioned Harmless but Verbally Abusive Fan. Another certainty is the Old Man Looking for Conversation. I felt a bit sorry for the Lang fan who kept on walking from one fellow fan he recognised to the other, whilst negotiating the crumbling steps of the enclosure with the aide of a walking stick, without anyone seeming particularly interested in his company or the sweeties he was offering. I admittedly did not feel sorry enough to start a conversation with him myself.

Unfortunately the football in the lower levels of the Juniors can be quite poor and Saturday's match is a contender for 'worst game of 2011' for me. Both teams were hardly able to create any goal-scoring opportunities with a goalless half-time score the logical outcome. I headed for the pavillion for a pie and bovril (£1). The pie was a good-quality Scotch pie. During half-time I took some pictures of the overgrown terraces opposite the enclosure and in the southern end of the ground. I then quickly fled the rain for the relative comfort of the enclosure.

The second half was slightly better and Cambuslang were starting to look like the stronger team. Eventually Billy Stevenson broke the deadlock after 26 minutes when he scored for Cambuslang. Although Benburb looked frantically for an equaliser it was the Lang who secured their passage into the second round when Aiden Malone intercepted a silly Benburb back pass and walked it into an empty net. Cambuslang will face Yoker Athletic, another Central Division One side, in the second round. 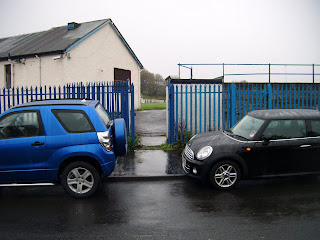 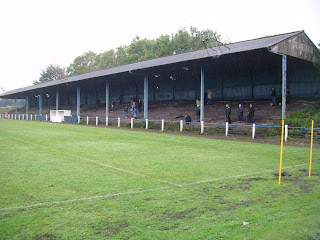 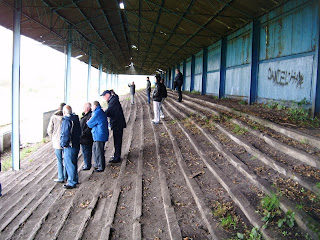 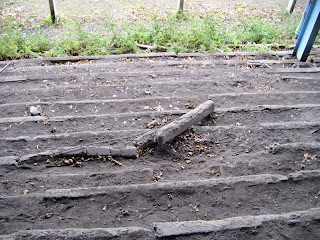 Luckily the health and safety police are not interested in Junior football. 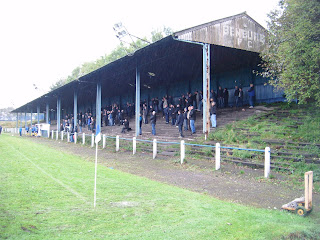 About 100 fans on the impressive terrace today. 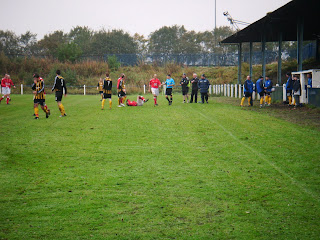 A Benburb foul in front of the home dug-out. 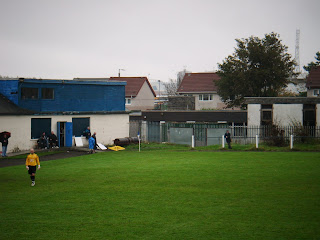 The roof of the Ibrox main stand can be seen between the houses. 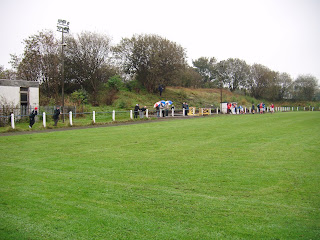 An overgrown terrace behind the away dug-out. One elder gentleman did not mind the vegetation. 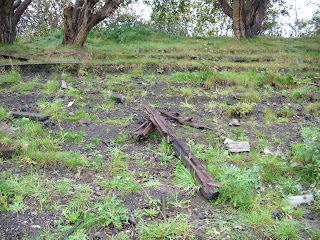 It does not really make for comfortable standing, especially not in this weather. 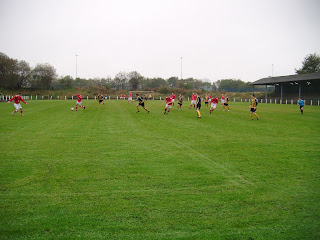 Also overgrown terracing in the southern end of the ground. 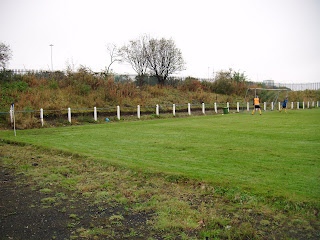 A closer look at the overgrown south terrace. 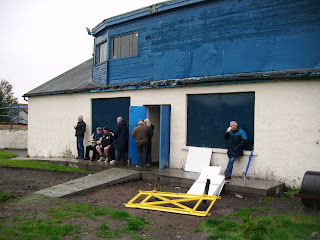 At half-time a pie and bovril in the pavillion. 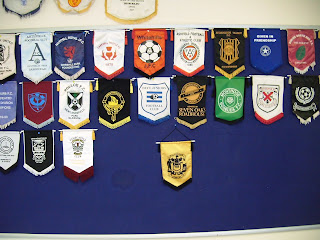 Pennants on display inside the pavillion... 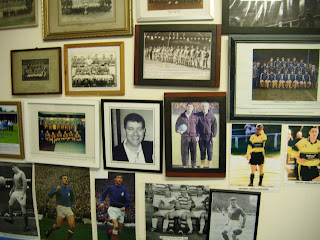 ...and some old photographs as well. 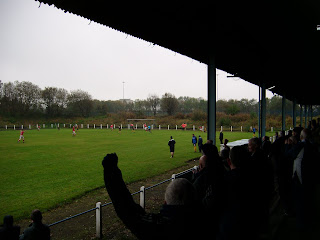 Cheers as Cambuslang open the scoring.