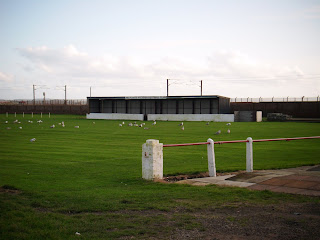 I had not updated the old blog for a few weeks because I have been busy with many things lately and adding posts to the site was not one of them. That does not mean I have stopped going to football matches so I will update you on my most recent trips in the upcoming days.

On Saturday 12th November I decided to take a train to Saltcoats to see the Emirates Junior Cup second round tie between Saltcoats Victoria and fellow Ayrshire side Darvel. This fixture had already been postponed twice in the previous couple of weeks but it seemed it was finally game on and the weather forecast looked fine. I picked this fixture as it was a relatively short trip (only thirty minutes on the train from Paisley) and it gave me the opportunity to tick off another Wetherspoon pub, the Salt Cot. I had forgotten about this pub but fellow groundhopper Stephen aka Groundhopper 2000 reminded me just in time.

I got off the train at Saltcoats at 1pm, exactly one hour before kick-off. From the train station it was a short walk to my first stop, The Salt Cot, one of the smaller JD Wetherspoon pubs I have been to but with plenty of real ales available. After I had finished my pint of Avalanche I made my way to Campbell Park, home of Saltcoats Vics and a fifteen-minute walk from the town centre.

When I arrived at Campbell Park it seemed very quiet, and I got that eerie feeling that is well known to most groundhoppers...a quick check on the Saltcoats Vics internet side confirmed that the game was off. It also mentioned that the game was supposed to be be played at Ardeer Stadium, home of Ardeer Thistle. So not only was the game postponed, I had shown up at the wrong ground as well. Unfortunately the SJFA website had the game still down as 'on' at that time and no mentioning was made of a ground switch.

It looked like I had wasted my money on train ticket but I quickly checked the Junior fixtures and found out Kilwinning Rangers were playing at home against Lugar Boswell Thistle. I decided to take the 2:35pm train to Kilwinning.

The Junior Cup tie was rescheduled to Saturday 19th November and the venue was switched to Darvel's home ground, Recreation Park. Despite losing home advantage Vics thrashed their opponents 8-0. 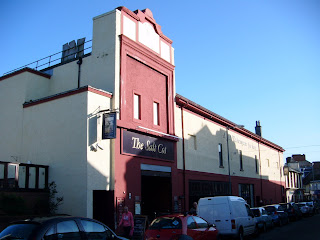 First a pint in the Salt Cot 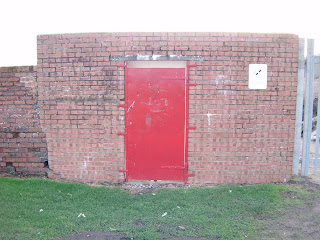