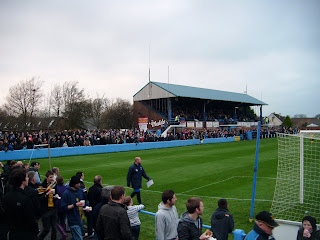 I had not updated my blog for exactly a month. One of the reasons is that I have not seen that many matches lately. I still have some pictures in the vault however which I will post in the next few weeks. I just have to make time to do it!

At the weekend the fourth round of the Scottish Cup was played and it featured a number of mouthwatering ties including Peterhead v Celtic, Arbroath v Rangers and Hearts v Auchinleck Talbot. I had not planned to see any football this weekend, also because the weather usually spoils things around this time of the year but it is now actually really mild for the time of the year. Still, the 'high winds' at Gayfield Park are never far away...

I did manage to see a third round Scottish Cup tie back in November. I made the short trip form Paisley to Irvine to see junior side Irvine Meadow XI, who qualified for the Scottish Cup as 2011 West Region Superleague winners, take on First Division team Livingston. Two season ago Medda eliminated Arbroath at this stage of the competition. Their reward was a glamour tie at Easter Road. Around 2,000 Irvine fans saw their team lose 3-0 to Hibs.

Few people expected the home side to repeat the feat of two years ago as Livingston are of a different calibre than Arbroath and it turned out that Livi were much too strong for the Ayrshire side. Marc McNulty, Livi's 19-year-old striker, needed less than five minutes to open the scoring. He added a second and a third to his tally but limped off with an ankle injury just after Rory Boulding had made it 4-0. Six minutes into the second half Kenny Deuchar scored the visitors' fifth. The home fans chanted "We're going to win 6-5" but Bobby Barr made sure it was a convincing scoreline for the West Lothian side as he scored 6-0 a minute before the end.

Not the most exciting game I had ever been to but always nice to see a packed junior ground. Highlight for many of the younger fans was probably the presence of Scotland and Everton striker James McFadden who for whatever reason decided to visit a junior club on a Saturday. I cannot blame as he probably does not get the opportunity on most Saturdays. After he was spotted by a clever local kid he was constantly signing autographs and posing for pictures and he seemed to be happy to do so for which he should be commended.

At the weekend all fourth round ties went ahead as planned by the way, even Arbroath v Rangers, which turned out to be a rather convincing 4-0 win for the Glasgow giants. Livingston had a disappointing result at home against fellow First Division side Ayr United. The Honest Men won 2-1 on Saturday and will play Falkirk in the fifth round, one week after their League Cup semi against bitter rivals Kilmarnock at Hampden Park.

For more pictures of Meadow Park see this post. 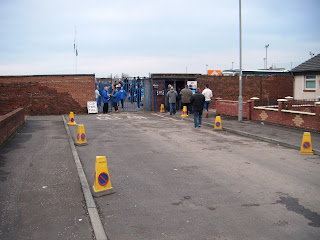 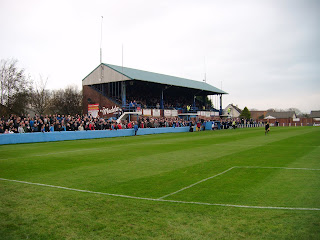 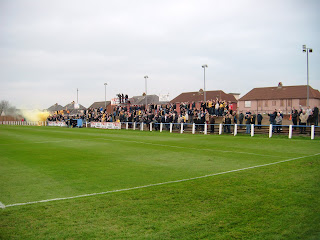 Livingston fans turned up in good numbers as well... 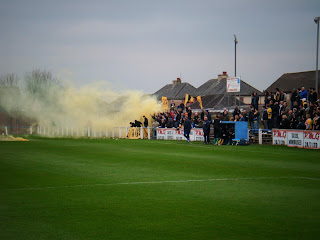 ...and they even brought flares, which is a capital crime in Scotland 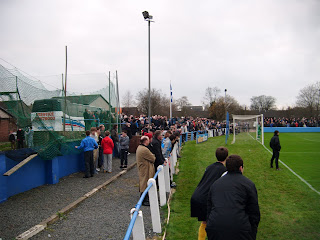 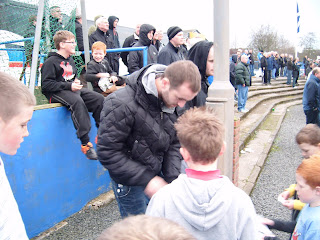 ...from where Scotland and Everton striker James McFadden was watching the game, or at least he was trying to! 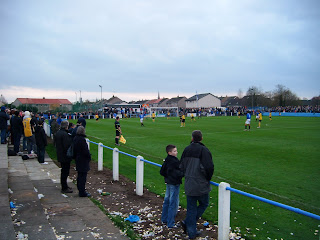 Looking towards the southern end of the ground. 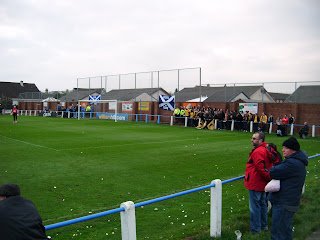 Some of the Medda and Livi fans were getting closer and closer to each other in the north end but four policemen managed to keep the peace.